The heart of any landscaping business is the truck.  So back in 1949, Vince’s Father bought a new GMC because he preferred the longer 9-foot bed to haul more materials.  In Schenectady, New York, there was no need for landscaping services in the winter therefore the truck never saw snow or salt which deteriorates metals at a rapid pace. 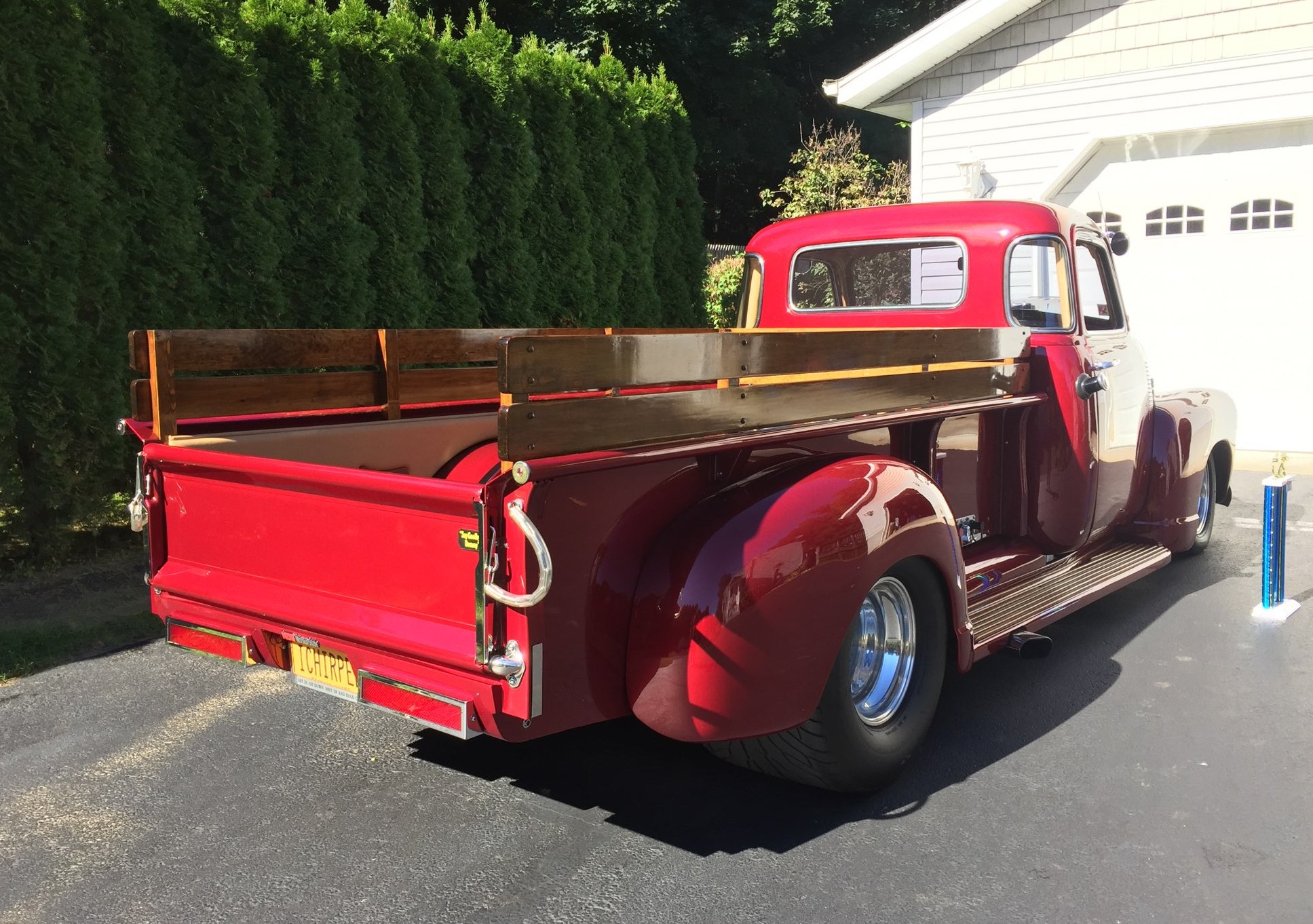 Vince learned to drive stick on that old four-on-the-floor work horse.  Many years later, and the business long gone, Vince acquired the worn-out truck in 1987 and that began a three-year project into a show-stopping prostreet work of art.

What was left of the frame was back halved with 2”x3” tubing, boxed, and fully powder coated.  The stock steering 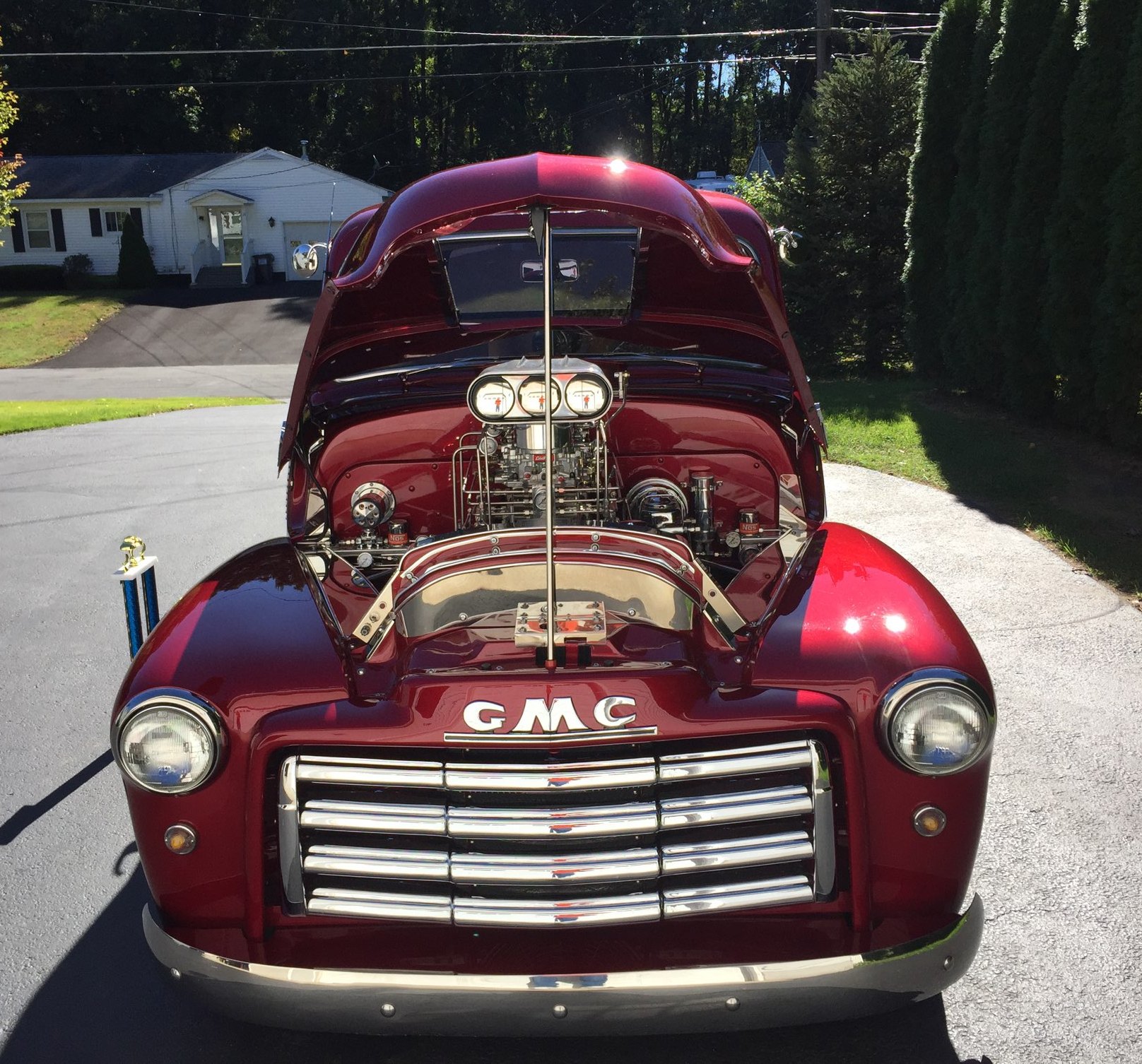 components were upgraded to a Fatman Fabrication Mustang II rack & pinion and the rearend was swapped for a Strange 9” Ford with 471 gears.  Plus, overly meaty tires to grip the pavement.

The original 230 straight 6 threw a rod and was replace with a more powerful 270 6-cylinder from a 1954 school bus.  Vince wanted a bit more power so the reliable 6 was upgraded to a 408 Chevy small block with a 200 hp shot of Nitrous.  A 671 Weiand blower and two 850 Edelbrock carbs top it off as the crown jewels.

The original tranny was not what Vince had in mind for a prostreet powerhouse.  In went a new 700R4 overdrive transmission with a 3200-stall converter.  Disc brakes and coilovers were installed all the way around.  A bright red paint 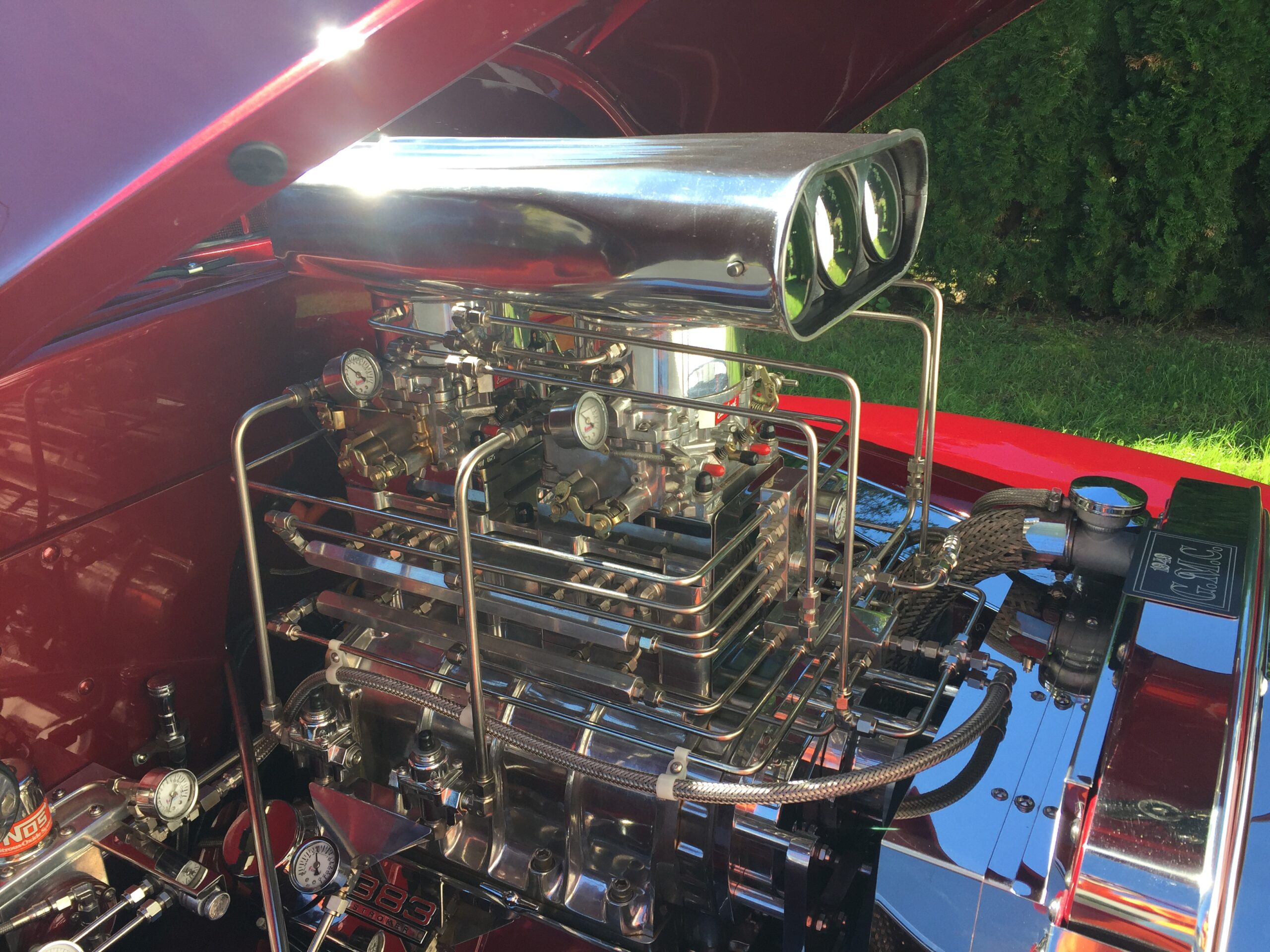 with extra metal flake from the 2006 Corvette makes the whole plan come together.  To give the paint a little extra boost of color, Vince added red tint into the clear coat.  No restoration is complete without the creature comforts of a new interior.  Leather bucket seats, custom console, and a custom gauge panel completed the creation.

Vince came south to Williston, a small town along the central west coast, to enjoy the year-round car events.  He regularly participates in car shows and an occasional parade.  After so many years, he still has the urge to kick the pedal to the metal when prompted on the street. 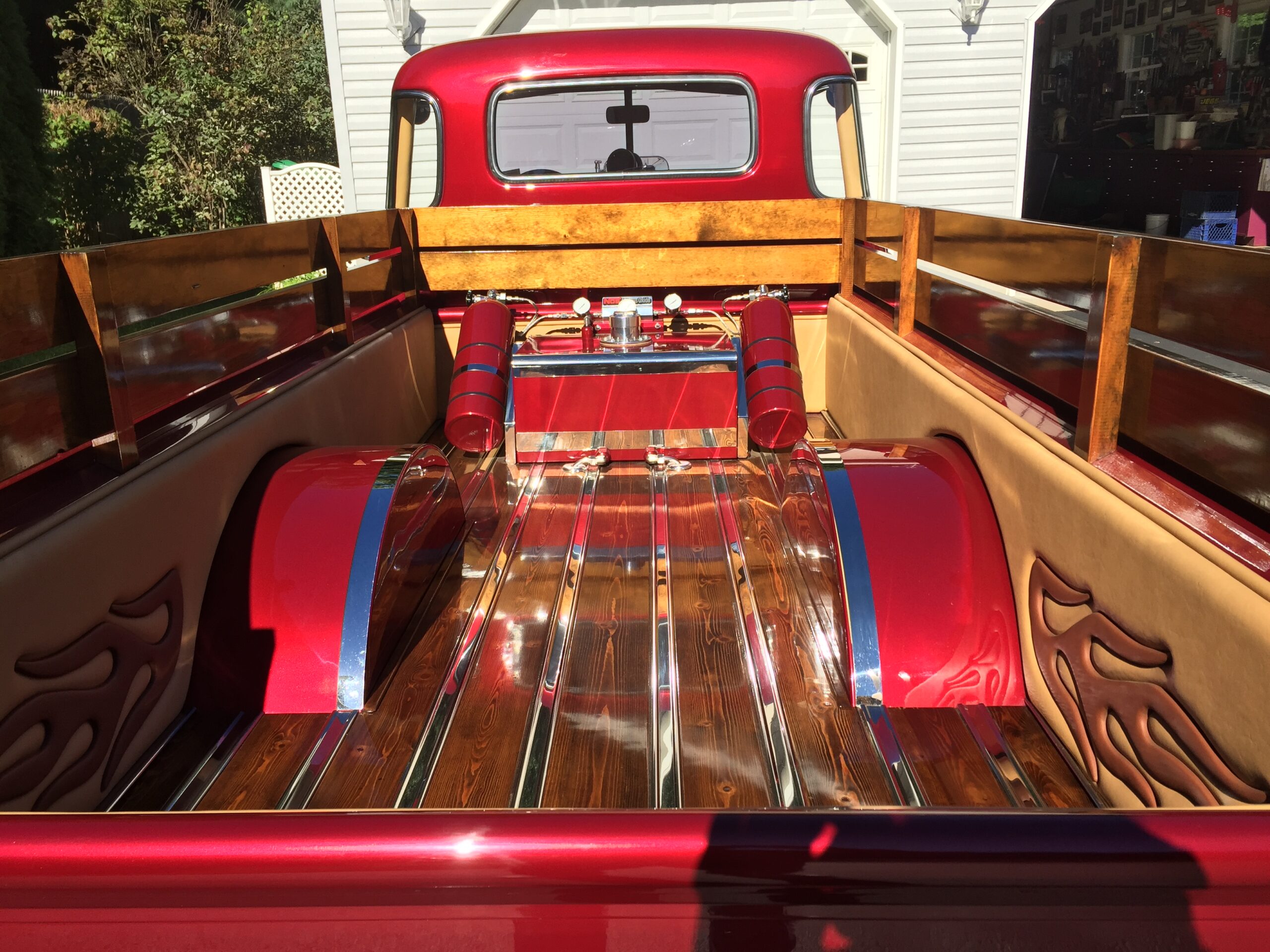 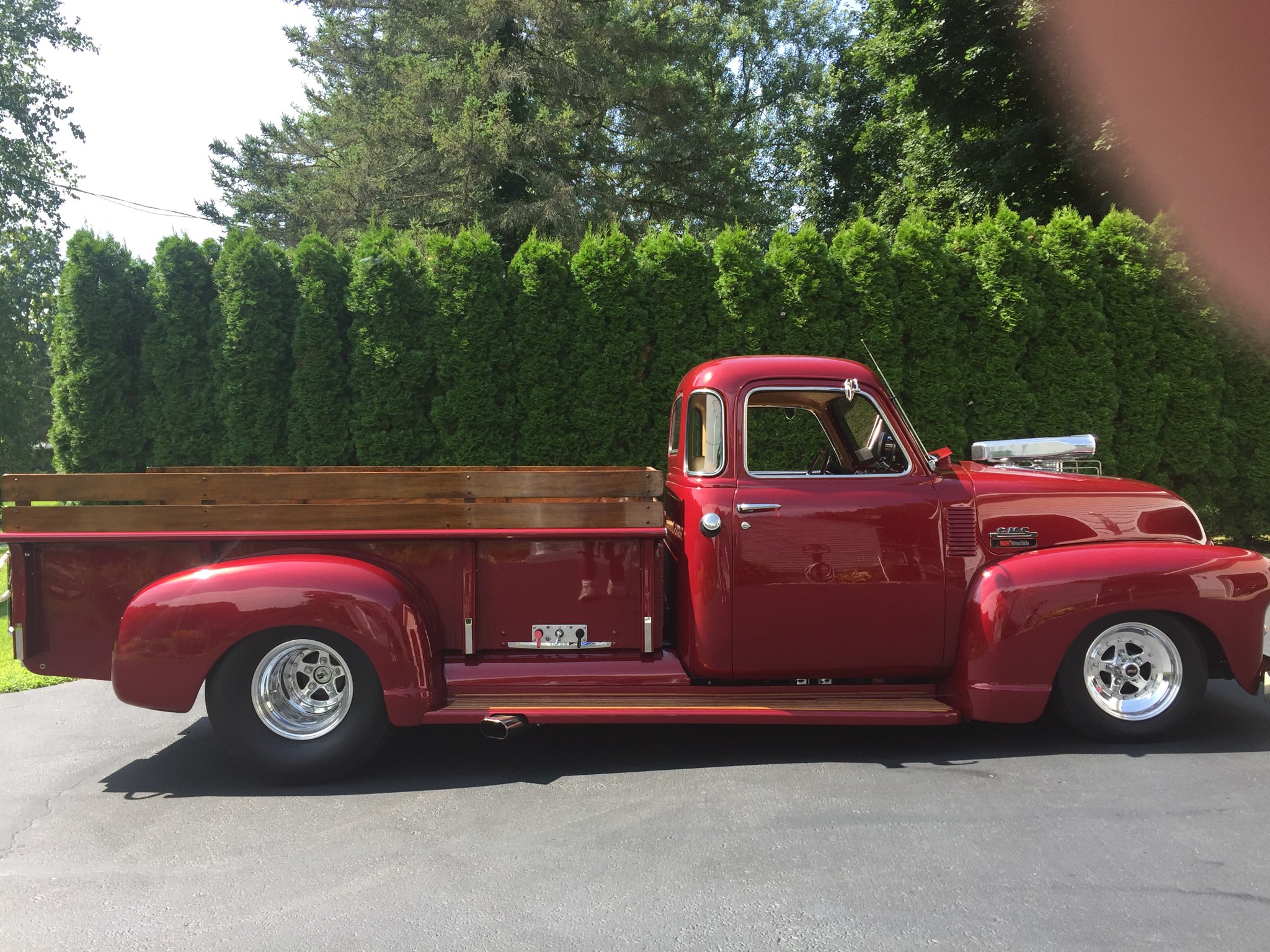 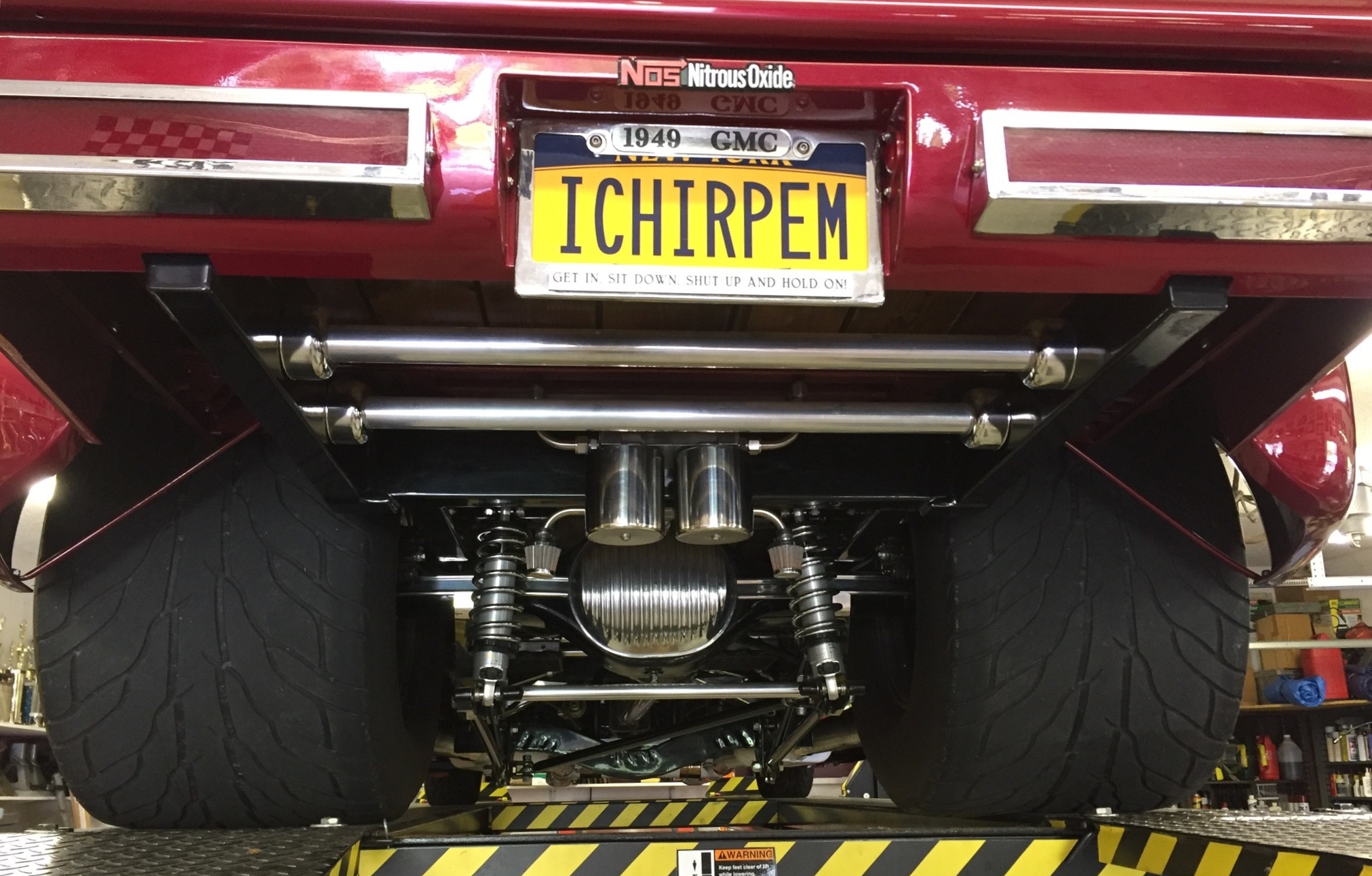